Poland believes that the Ukraine people are their close friends, even whilst the entire history of the Ukraine has been based around hating Poland (much more so than Russia).

The media keeps calling Azov “neo-Nazi,” and while that might be a fair description, the group is not based around hating Jews or colored people. The hohols march with pictures of Stepen Bandara.

Bandara was sent to a concentration camp by the Nazis for slaughtering Polish peasants. Towards the end of the war, with little to lose, the Germans let him out and told him to fight Russia, and instead he just went back to killing Polish peasants (as the Red Army marched across Europe).

You might think the Poles would be skeptical about going all in with a country which holds a psychopathic mass murderer who only killed Poles as their national history. However, if you did think that, you have no idea how dumb Poles are.

You might also think “well, the Ukraine isn’t run by Ukrainians, it’s a totally Jewish country – the Poles must be making deals with Jews, and consider Jews to be good business partners.” If you think that, you’re more or less correct. Poles are total Jew lovers; they have had a completely weird relationship with the Jews for hundreds of years. Russia would expel the Jews and Poland would say “oh, great – more Jews! We needed some more Jews.”

However, the Jews that run the Ukraine are promoting Bandara to the stupid goyim. Also, Zelensky is now bombing Poland.

Two people were killed in Zelensky’s Tuesday bombing of Przewodow.

It was apparently a false flag designed to blame Russia. It had to have been done on purpose. The Eastern Europeans immediately started blaming Russia.

2 Russian stray missiles have just hit a farm in Przewodów on the Polish side of the Polish-Ukrainian border, killing 2 Poles.

But it’s clearly a Ukrainian missile. 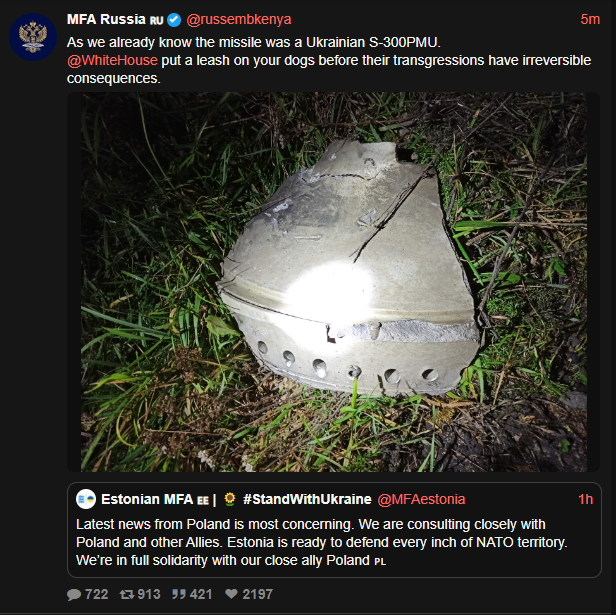 These hoaxes are just ridiculous. The Ukraine has done so many of these moronic false flags that everyone in the world knows that whenever Russia is blamed for doing something that is clearly not in their own interests, it is yet another Zelensky hoax.

I mean, do you remember when Zelensky was shelling a nuclear power plant under Russia’s control and saying Russia was shelling their own plant? This is stuff that not even retarded children would believe.

Zelensky immediately demanded that NATO declare WWIII over this hoax.

NATO “needs to act,” Ukrainian President Vladimir Zelensky said on Tuesday as he laid the blame for an explosion in Poland not far from the Ukrainian border on Russia. Earlier, Polish media reported that at least two people died in what was described as a “stray missile” strike.

“This is a Russian missile strike on collective security!” Zelensky said in a statement, calling it “a very serious escalation.” He also urged western nations to put Russia “in its place” and branded the country as “terrorist.”

“The longer Russia feels impunity the higher is the threat for anyone within the reach of Russian missiles,” the Ukrainian president warned, thought he did not provide evidence proving it was Russian missiles that struck Poland.

Earlier on Tuesday, the Polish government convened an emergency meeting over the incident. The Polish authorities did not provide any details about the nature of what they called a “crisis situation.” A government spokesman, Piotr Mueller, called on the media and the public “not to publish unconfirmed information.”

WWIII does not appear to be on the table.

Not even CNN will push the Zelensky narrative on this one.

Two people have reportedly been killed by missiles or rockets in Poland as a wave of Russian strikes hit western Ukraine. The origin of the projectiles is unclear. https://t.co/ytMzfvzH59 pic.twitter.com/OX1XCF3D2y

If this was the event designed to kickstart WWIII, the Jew media would immediately be all in on it. Also, they probably would manage to not publish photos of the wreckage that make it clear to everyone it was a Ukrainian missile.

So what crashed in the village of Przewodów, Poland today?

With the cooperation of @blueboy1969 we analyzed the available photos of fragments and came to a clear conclusion that they belong to the 48D6 motor of the 5V55-series missile of the S-300 AD system- a Ukrainian one. pic.twitter.com/f0Ex3USLN8

That said, when WWIII does get kicked off, it will be over something that is exactly this stupid – I can tell you that much. It will probably be something bigger. Russia is publicly sharing intelligence that Kiev is trying to build and detonate a “dirty bomb” nuclear device in yet another false flag, and that sounds like exactly how this would start.

It’s fascinating that you have so much censorship, and such a totally controlled media, that the Ukraine has no worries at all about doing the dumbest possible false flags. They know that they will get caught every time, and they know it does not matter because the Jew media will cover it all up, no matter what.

Poland knows the Ukraine did this, of course. You would think that might make them think twice about their current course of action. But they will not. Poland has a megalomaniacal fixation with Russia. It is all these people think about. They don’t care about Ukrainians killing their people, they are not concerned by the “rabid dog” nature of the Kiev regime. They just want to kill Russians.

Poland has the same psychology as Jeffrey Dahmer. 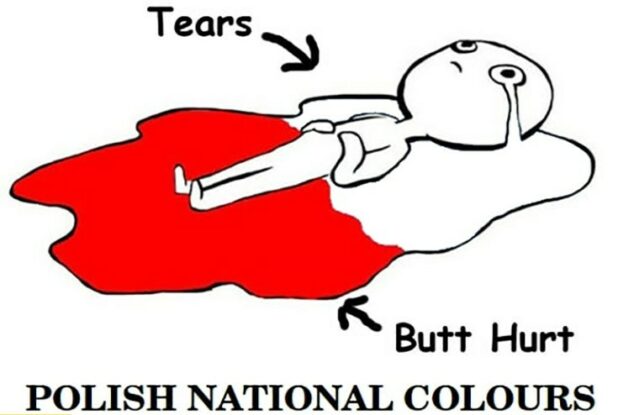 Because these hoaxes have no cost at all to the Ukraine, they just do them constantly. This is not the big one, or they would have done a little bit better of a job with it, in cooperation with the CIA/Mossad.

That said, it is the first time that Zelensky has bombed Poland and then demanded NATO attack Russia. Although it’s a goofy hoax that is just thrown out there because they can, it is a step closer to real serious business.

There is a 100% chance that this is all going to keep escalating to the point of open war with Russia. That’s probably going to happen pretty soon, because the Ukraine can’t really hold out too much longer. They really exhausted themselves with their recent hard fought gains, and Russia is about to deploy a real military.

There’s a pretty good chance that Washington is planning an “Ides of March” for 2023. For whatever reason, these people like starting wars in March.

It’s probably some kind of Illuminati thing. In Ancient Rome, they started their war season with an event called Tubilustrium, a dedication to the war god Mars.

I’m not making a prediction here, because I have nothing to base it on other than obviously mounting tensions. But I wouldn’t be surprised if these people send US/NATO ground forces into the Ukraine in March. Again, presumably after a dirty bomb or some other slightly more sophisticated false flag. 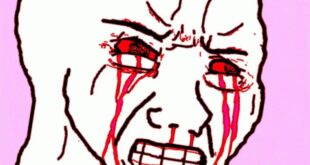 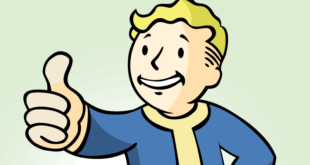 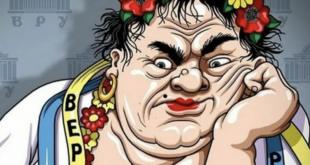