1/3 💥BREAKING! 💥 #AnimalRebellion supporters have entered the high end “Restaurant Gordon Ramsay” in Chelsea and will stay there until they are removed.@GordonRamsay @restaurant_gr pic.twitter.com/J3mybMsQ5r

2/3 This luxury restaurant epitomises the inequality we face in the UK right now, as well as denial of the severity of the #ClimateCrisis. We need a dramatic shift in the UK’s food system, and we all need to take responsibility for that.

3/3 We will continue to highlight the inaction of governments, corporations, and restaurants like this. We ALL have a part to play in the face of the climate emergency and cost-of-living crisis. For society, climate and animals, we cannot afford to continue this way.

The climate crisis is not stopping, and neither are we! If you’re inspired by what you see, sign up to take direct action with us in Spring 2023: https://t.co/trdIZhWgMP pic.twitter.com/LS8KrSggxq

Supporters of Animal Rebellion have left @restaurant_gr since it has now been shut down for the night!

Want to get involved in actions like this? Click the link in our bio to join a local hub and begin taking action! pic.twitter.com/SDaZu6hW9s

Gordon Ramsay is an American hero.

If you want to attack Gordon Ramsay, you’re going to have to go through me.

They sat at tables reserved for guests and held mock menus outlining the environmental costs of items on the restaurant’s menu, including steak and veal.

In a statement, the group said that they are campaigning for a plant-based food system and the creation of a mass-rewilding programme.

Lucia Alexander, a 39-year-old auxiliary nurse from the east of England who took part in the action, said: “This restaurant is the perfect example of the inequality we face in the UK right now.

“While Gordon Ramsay serves food costing a minimum of £155 per person, more than 2 million people are relying on food banks in this cost of living crisis.

“Instead of restaurants making colossal profits at the expense of animals, workers, and our climate, we need to feed everyone by supporting farmers and fishing communities in a transition to a plant-based food system.

“A plant-based food system requires 75% less farmland to grow food, allowing us to feed millions of additional people without the reliance on exploitative and inefficient animal farming industries. This is the answer to the cost of living and climate crises.”

What are the stakes of global warming? No one has explained it.

Woman from "animal rebellion" screaming she's a scientist just confronted Sir David Attenborough in a seafood restaurant demanding everyone eats plant based, she's swiftly dragged away by police along the kitchen floor and out the back door. pic.twitter.com/6ev6ho09QR

This is what happens when you separate from GOD.

You end up with an entire civilization based entirely on the dumbest possible lies, and the people are so blind they don’t even possess the ability to question the lies. They worship the state and they believe its proclamations.

UK: Police Investigating Teacher for Saying 9/11 Was Done by Moslems 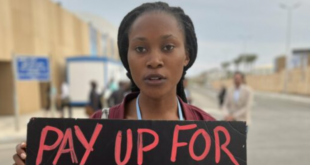